The War, in a Footnote 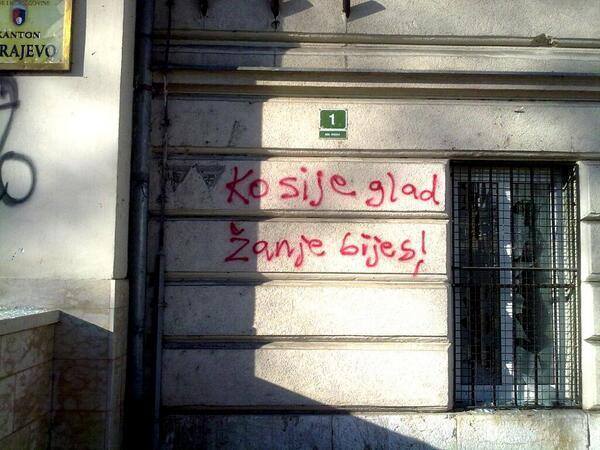 Folks who follow this magazine will have noted that we keep closer tabs than most on events in the former Yugoslavia. Here MR Contributor Ulvija Tanović reports from streets of Sarajevo on the protests that have lit up cities around Bosnia-Herzegovina over the past week—a revolt that began on the thirty-year anniversary of the 1984 Winter Olympics.

“Who sows hunger reaps anger!” says the writing on the wall of the Sarajevo Canton Government building, next to a shattered window. After years of peaceful protests that were consistently ignored by the powers that be, a week ago Friday people finally succumbed to violence, hurling stones ripped out of the pavement at government buildings and setting them ablaze with Molotov cocktails. Then they stood back and watched them burn.

“… this is just the beginning.

You should have seen the people, their faces

they were angry and sad, or some emotion somewhere in between

we’re all just standing there, no one doing anything anymore, we hear the ambulance sirens and just stand there, everything is burning, some women are crying, all you hear is sniffing and coughing

but you don’t see anyone regretting it, people help someone into the ambulance, splash water on their face, hand someone the first-aid kit. And you realize the people just couldn’t stomach it anymore

a kid in a balaclava says, let the motherfucker burn, my mom works two jobs, I see her for maybe an hour a day

for twenty years, I’ve been, like, getting this pension because I lost my dad in the war, and all I get is fifty marks

let it burn. and we just stand there in silence and watch”

The above is a faithful translation of an account from Friday night’s bonfire of the hunger-sowing kleptocracy. The screenshot has been posted around Facebook in an effort to counteract the mainstream media intent on spinning the citizens’ revolt into incoherence and vilifying the “kids in balaclavas” beyond all recognition.

Or rather, it’s an almost faithful translation. I left out one thing. A name. In its second line, the author of this glimpse into the spark that lit up the city of Sarajevo addresses her friend by name, a name that would make no difference to an English speaker, but that made me see an unexpected glimmer of hope in that fateful spark. In naming her friend, she reminded me of what I’d always known to be true—empty stomachs have no nationality.

Names, of course, are untranslatable. They are what gets lost in translation. In most cases, the loss is practically negligible, because names are essentially meaningless.

Not so in Bosnia. In Bosnia, names are what makes a person identifiable as belonging to one of the three major ethic groups, or to a national minority, or even to somewhere in between. Names, in other words, are where it gets complicated—for you English speakers, that is, and for us translators, often saddled with the unwieldy task of having to explain it all in a footnote. The war, in a footnote.

Last week, kids in balaclavas and Guy Fawkes masks started torching government buildings in Bosnia, their uprising spreading like wildfire from the city of Tuzla in the northeast, a city left relatively unscathed by the war, but utterly devastated by the post-war "privatized massacre of its industry." These kids were born during the war, named during the war, saddled with its legacy. To them the war could never be just a footnote.

Straightjacketed into the manipulative politics of names, of divide and conquer, their futures were used as collateral for loans the government brokered with the IMF and foreign commercial banks to feed the growing appetites of the new ruling class that emerged after the war, hands bloodied, drunk on power, ready to sell out its people in a heartbeat if it meant sidling up a step closer to the one percent of more developed capitalist democracies.