Our Oracle Shuts the Door 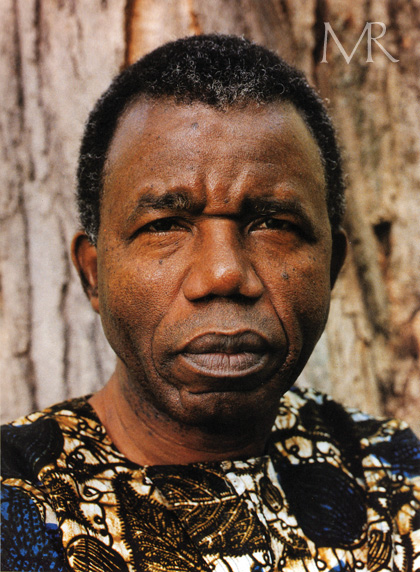 I wouldn’t like to describe Professor Chinualumogu Achebe as an iroko tree. No, he was mightier than that. In a thick forest of copious trees, one tree always stands out: the Uzi tree. It is taller than the iroko. The Uzi is always rare; sometimes, only one appears in an entire forest. But there could be many irokos in a forest. They even stand on the streets, everywhere. No, Achebe was not that common. He was loftier than his fame!

The bark of an Uzi tree is medicinal. Many herbalists, experienced and upcoming, approach it with machetes to cut off a portion to cure diseases, yet the tree stands unscathed. It does not shed its leaves. It does not bleed. It only exudes its sap when the herbalists immerse the shredded bark in a keg of alcohol or water, in order to have the medicine seep out. During windy, fierce hamattan seasons, irokos could have their branches broken. This deficiency does not apply to Uzi. And whenever there is need for wood, people hack irokos down, but the Uzi is revered, with its lush, swanky green leaves attracting a large pilgrimage of avian animals. Achebe’s fiction is medicinal, undeniably sacrosanct. It has cured the world of many diseases of the mind: racial discrimination, religious intolerance, mental slavery, subjugation of thought, entrapment of black intellects, disdain for Africa’s indigenous cultures and religions, among others. Chinua Achebe, through his extraordinary defensive literature, gave Africa a new positive interpretation. Africans became proud of Africa, although there are still islands of mental and religious slaves around the continent. His rare shrewdness detected every prejudice against Africa, no matter how nuanced, and he reacted appropriately.

As a young boy growing up in rural, southeastern Nigeria, I did not have the privilege of reading foreign books. Even as a toddler, I never read illustrated children’s books. They were not available in the village. I depended on indigenous African literature, which I didn’t buy, couldn’t buy, but I read as much as I could borrow from friends and neighbours. I realised that each time I went borrowing, I was offered a Chinua Achebe book. One of my primary school teachers once lied to me that the Bible was written in heaven and flung down to the world. I started to wonder whether Achebe’s books were among those things that God had created in the sky and thrown down, because the books were ubiquitous in the village—and understandable. When I went to the stream to fetch water, students from secondary schools discussed Achebe’s fiction with joy. I could identify with the things written there: our village foods, our masquerades, our family system, our method of farming, our animals and many other native valuables embellished in his stories. It was as though the stories were set in my own village. It became normal, for me, that one must read Achebe so as to be considered educated.

In the village, the ability to speak a speck of correct English was applauded. We, the village children, gathered around city boys and kids who had returned home for Christmas, listening to their English, willing ourselves to speak asupili supili like them, a fact that made us almost detest our native Igbo Language. Our inability to speak English early enough caused a sort of inferiority complex in us. We spoke English with fear and conservative dignity because we thought it difficult, full of strict rules of grammar that one could not break. I later figured out, my ribs bashing with amusement, that the city people’s English was odiously ungrammatical, a local contrivance to achieve fluency: pidgin. Achebe, through his books, demystified the English Language for me. The books are simplified with supple details. Achebe made English approachable, configured it to taste like Igbo in my mouth. I comprehended that one could speak English with a stocky Igbo mouth, found out that English is not better than Igbo; they are both equivalent in all ramifications. As an adult, I did not have the grace of meeting him, face-to-face; it was not necessary because I meet him daily through my stack of his books, my treasures. The human mouth is full of lies, but Achebe’s fiction is full of truths, undeniable facts. The immortality of his writings is unquestionable. Some men shouldn’t die!

Today our oracle has shut the door, but he still remains inside the holy shrine. In Africa, people don’t catapult themselves to unknown destinations when they die; they stay (in the spiritual world) around their families to plan and supervise the affairs of the mortals, sheltering the humans with divine protections of all sorts. Chukwu chebe muo gi!

Writers don’t die. Has Chinua Achebe died? No! The Uzi tree does not die like that. The Igbo say uwa bu ahia—the world is a market: you come, trade and step aside, and not necessarily die. Achebe lives in every creative mind, solidly.

Jekwu Anyaegbuna is a Nigerian writer. He won the 2012 Commonwealth Short Story Prize for Africa. He has just completed
his first novel. His story “The Waiting Stool” appears in the current
issue of MR.